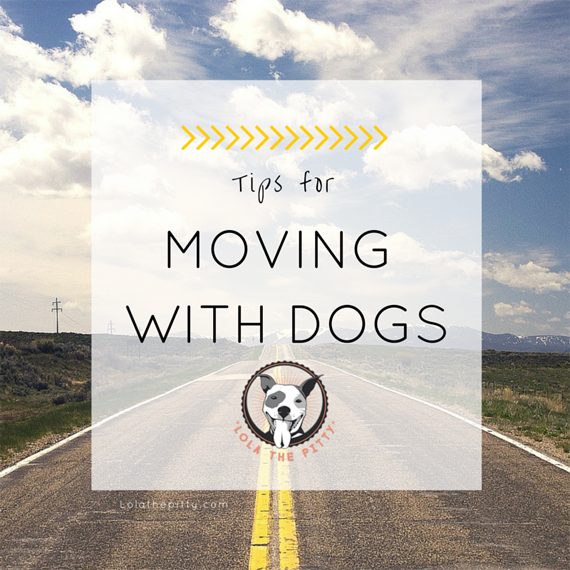 Where do I begin? Moving with dogs can be, well…stressful (for you and the dogs). Moving 860 miles with two dogs is no different. We recently moved to Colorado (January of 2015) from Minnesota and of course, hauled the two mutts and most of our stuff with us. The cheap Ikea furniture – yeah, that was either a. donated or b. given away. Ikea stuff, while I love some of it, is only good for about one move and quite frankly, I wasn’t about to pay $500 extra dollars to move a $69 TV stand. That may be a big of an exaggeration, but you get what I mean.

So among all of the packing for weeks (or months in my case), moving boxes down stairs, deep cleaning, and finally – hauling every last thing out of your house, are your pets who have no idea whatsoever about the situation. All they know is that it’s changing. Change can be scary, for some more than others.

Rio is typically our cool-headed, go with the flow kinda dog. He’s never really stressed out in situations and has handled everything we’ve thrown at him without batting an eye. I’m still uncertain if he doesn’t ever really know what’s going on, or he’s just that type of dog.

Lola on the other hand – she can be a bit of a (for lack of a better word)…spaz. She gets easily stressed, the suitcase comes out and she’s on guard. The keys get picked up and she is waiting at the top of the stairs, in attempt to block you from leaving. Or hoping she can come with. Probably the latter.

As you can imagine, the big move impacted them both. But I made sure to keep them both as comfortable as possible during the process and I have no doubt that it helped. Inevitably you’ll experience a move at some point in your life and hopefully, your dog(s) will be coming with, in that case – here are some tips from our experience that I hope will help you!

4 tips for moving with your dog:

1. Keep their world as peaceful as you can, for as long as you can

As I mentioned, boxes were being packed months in advance in our circumstance. I was aware of the move and wanted as much time as possible to plan for it. Of course, this isn’t always the case with everyone, but I hate not being prepared.

Pack up their stuff at the last minute possible. For us, this was the night before we moved. We loaded the kennels in the car and had a box set aside for their toys. Okay, more like three boxes, but yeah.

2. If possible, introduce them to their new environment before moving

For us, we had been to Colorado several times with the dogs and they had stayed the night in my family’s house, who we are staying with until we are able to move into our new house. It was kind of like a vacation, we just never went “home”.

3. Keep familiar scents and  around once moved

Blankets, crates, toys, etc. Keep all of your dog’s belongings with your dog. This is another reason why I’m a believer in crating – it’s their ‘safe place’ and a familiar place that is their own little home, the only thing different about it is it’ll be in a new place, but it looks the same inside and smells the same, this should provide your dog with comfort.

Dogs rely on schedules. I don’t know about your pups, but if we forget a meal around here, Lola and Rio are sure to remind us. Keeping their potty schedule, walks, trip to the park, feeding schedule, etc. the same will mean less change for your dog.

I won’t lie though, even with all of the precautions we took, come move day, Lola and Rio were clearly stressed. We had to drive separate of course because we had two cars to take down to Colorado. Lola went with her dad for most of the way, and Rio with me. Surprisingly, Rio was pretty much freaking out. He was panting, unsettled, and didn’t even want his peanut butter filled Kong which we had made for him the night before (unheard of). He knew something was different and I think it really hit him the two nights before the drive when the house we were living it was literally emptied out and we stayed at my mom’s the night before the drive. I don’t think any of us slept for those 48 hours, but it’s over.

A week or so after settling in Colorado, the dogs were back to their normal selves. It was probably a little before that, but the couple days before the move was unsettling to them, the drive down, and of course once we arrived in Colorado they were a little unsettled for a couple of days.

A few signs your dog is stressed/worried:

Have you moved with your dog? What have you found to help them transition? Share in the comments below.